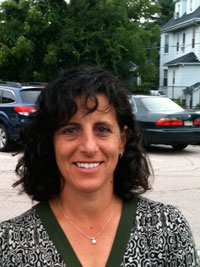 Theresa DeGirolamo graduated from Mansfield High School only to return years later as a biology teacher and coach.  In the meantime, she earned a degree from Boston College, coached field hockey for 6 years at the collegiate level, and taught and coached at Ursuline Academy.

A dedicated “townie”, Theresa gives much to the student-athletes at Mansfield.  After a 3 year stint as a field hockey official, she coached field hockey on all three levels for 12 years (and counting).  She has been the freshwoman basketball coach for 15 years, and coached softball for 10 years.  She also coached the tennis team for 5 years.

Theresa is the “go-to person” whenever there is a need for supervision, help with a team, or short term coaching position.  Whether it involves providing coverage for a special event or teaching a new drill after taking a jog with the team, Theresa is always willing and able to help the athletic program.

She has had “the pleasure of coaching” field hockey on all levels – youth camps, all three high school levels, Division III at Wheaton, and Division I at Brown and Penn State.  In addition to coaching and teaching for 21 years, Theresa was the advisor for the Student Council promoting leadership and service.