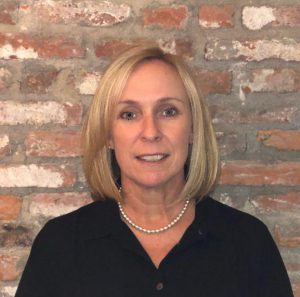 Trish Witkin holds a bachelor of arts and a master’s in education from the University of Hartford earned in 1993 and 1996 respectively.  In 2007 she earned her certification as an athletic administrator (CAA) and three years later, received designation as a certified master athletic administrator (CMAA). Trish is currently employed at Glastonbury High School as the Director of Athletics, a position she has held since 2007.

“Through my own participation in youth, high school and college sports I have seen first hand the many benefits of participation in athletics for young men and young women. During this experience, I have been subjected to and witnessed inequities for women and girls. It was those experiences that motivated me and drove me to a career in education based around athletics where my focus and intent could be to ensure opportunities were fair and equitable in all areas, including equipment, facilities opportunities, recognition, awards and benefits.”

Trish began her administrative career as a coordinator of athletics at the Enfield Public School in 1998.  She held this position for 8 years.  While at Enfield, Trish coached softball and volleyball at Goodwin Tech High School and Simsbury High School. Once Trish became the Glastonbury Athletic Director, she became an integral member of many boards and committees at the youth, town and state level.  She currently serves on the Connecticut Association of Athletic Directors (CAAD) Board of Control; CAAD Strategic Planning Committee; CAAD Statewide Faculty Modules and the Connecticut Interscholastic Athletic Conference Michael’s Cup Sportsmanship Committee.  Trish is a past-president of the Connecticut Association of Athletic Directors (CAAD) and was the National Interscholastic Athletic Association president in 2015.  She was also a member of the CIAC Board of Control.

Trish’s many professional achievements include the NIAAA State Award of Merit for Connecticut and Distinguished Service Awards presented by CAAD in 2019 as well as NIAAA in 2017.  Additionally she has earned induction into the Wappinger Central School District (Wappinger Falls, NY) Hall of Fame. Under her leadership, Glastonbury High School was selected as the state’s most exemplary athletic program for two consecutive years in 2010-2012.  Trish was also awarded the Simsbury Little League Sportsmanship Award in 2012.