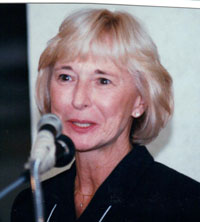 Virginia Anderson, a graduate of Courtland State College, has been a teacher of physical education and a varsity gymnastics coach at Holyoke, MA, High School.  As the first female athletic director in western Massachusetts, she was charged with implementing a comprehensive athletic program for middle and high school female athletes.  Virginia has also been principal at Longmeadow, MA, High School.

Currently, Virginia is the first full-time woman to sit on the Executive Board of the Massachusetts Interscholastic Athletic Association (MIAA).  In her capacity as Associate Executive Director, she is responsible for the tennis and sports medicine committees.  Through her efforts, the MIAA has created and implemented an Equity Committee.

Virginia has been a member of the Pioneer Valley Interscholastic Athletic Association.  During her membership on this committee, she worked to consolidate eight leagues (43 schools) into one league – the Pioneer Valley Interscholastic Athletic Conference (PVIAC).  She served on the Executive Committee of the PVIAC, and as the District F representative on the executive board of the Massachusetts Secondary School Athletic Directors Association.

During her early years of coaching girls’ intramurals – soccer, volleyball, basketball, and lacrosse – records were not kept for girls’ sports.

Virginia has been actively involved with organizing and running MIAA tournaments in basketball, swimming, volleyball, and softball.  She has also served as the tournament site director for soccer and gymnastics.

Virginia looks forward “to a future when the issue of equal opportunities for young girls and women is not an issue.”