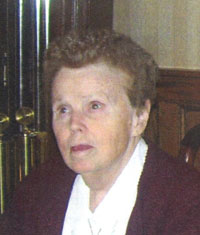 Virginia is currently a guidance counselor at Boston Latin Academy.  Under her supervision as the Associate Director of Physical Education from 1974 through 1981, she was able to expand the girls’ interscholastic program.  During this time, she designed the requisition for girls’ sports, conducted clinics and workshops for coaches, and instituted the John Hancock Olympics for high school and middle school girls.  She also scheduled and assigned officials for all girls’ sports.

An active official in softball and basketball, she has served in elective offices on the Boston Board of Officials.  She is an Honorary Life Member of the Board and initiated courses in officiating for high school seniors who eventually became rated officials.

She has received the award for outstanding service in her profession from Sargent College.

Virginia White was in the right place when Title 1X was passed: she was an accomplished athlete, a physical education teacher and a guidance counselor in the Boston Public Schools.  In 1975 Ginny became the Assistant Athletic /Physical Education Director for The City of Boston.  She had a tremendous opportunity to build a department that would meet the needs of 70,000 students, teachers and coaches. She was most effective as an outstanding leader and advocate for girls’ and women’s sports. Coaches and teachers were able to stand strong under Ginny’s guidance and leadership.   Parity within the coaching ranks for female sports finally became a reality.  Ginny created an atmosphere for success with her vision of high expectations, always with the best interest of the Boston student at heart.  Professional development workshops, coaching clinics, and numerous training sessions were added to enhance teaching and coaching.  With the assistance of local universities – Boston University, Northeastern, and Boston State (UMass) – new and better techniques were introduced.  Many professional athletes volunteered to assist with training.

Ginny developed a good rapport with her staff.  Her passion was contagious.  She appreciated hard work and her constructive feedback was welcomed.  Many teachers and coaches have remarked that Ginny White had a quiet personality and walked tall among so many adverse issues: Desegregation of the Boston Public School System in 1974, School Busing, Title IX-Equal Opportunity for Women.  She had a wonderful message: “I am listening, I care, I hear you, you are important to me”. Ginny played a vital role in enhancing an Athletic / Physical Education Department that was proud to have her as their leader. Ginny coordinated and directed the very successful John Hancock Sports Olympics held annually at Boston University.  All city high school female students were invited to participate in a day of fun and sport, culminating with an Olympic trophy being awarded to the school with the highest point total.  Only non-varsity athletes could compete.  Swimming, volleyball, track and field, tennis, basketball, and badminton opened up a whole new world to many young women who had never had an opportunity to compete before. Ginny knew the importance of having a game well officiated.  She took great pride in hiring the best umpires and officials – even better if they were female!   Officiating clinics, dance workshops, health seminars, and inspirational speakers added to the many opportunities available to the staff.   Ginny’s leadership brought a new found excitement to Boston Athletics.  The Boston Public School students, teachers and coaches offer their respect and profound gratitude for her many years of hard work and dedicated service.

Ginny White is an Honorary Life Member of the Boston Board of Officials, recipient of the Award for Outstanding Service in her Profession from Sargent College, and was inducted into the New Agenda Hall of Fame in 1989.

Many thanks to Barbara Ward, Maryellen Harrington, Pauline Yee, Bonnie Mitton, and Carolyn Cohen who contributed to this profile.