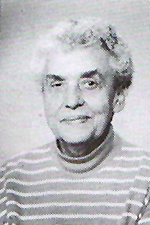 Over the years, she was affiliated with the Connecticut DGWS serving as its president for two years.  Membership in other organizations included the CT Interscholastic Athletic Conference, Girls Athletic Committee, and the Girls State Basketball Tournament Committee.

An MVP award, named in her honor, is presented yearly at the Connecticut State Basketball Tournament.