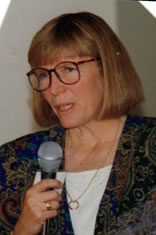 Yvonne is a teacher and coach at Triton Regional High School.  She has been a field hockey coach for 21 years.  In addition to field hockey, she has also coached basketball and softball.  Yvonne, a nationally rated basketball and volleyball official, officiates for the Cape Ann League.

Yvonne has participated extensively in post-season tournament play.  Her teams have won 8 Cape Ann League Field Hockey Championships and were runners-up six times.  She first qualified for the State Tournament in 1975 and, since then, she has qualified 17 out of 19 years.  In 1983 and 1985, her teams won the Division II North Field Hockey Championship and in 1988, her team was the North Division II Runner-up.

Yvonne has been named Field Hockey Coach of the Year by the Bay State League three times, by the Newburyport News four times, and by the Boston Globe two times.